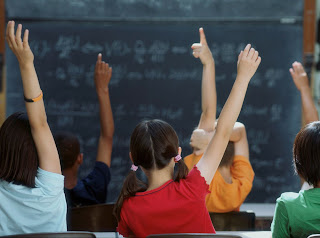 Recognise any of these scenes?

The high school student stretching her arm into the air, busting to answer the question – or the one sinking into her seat to avoid being picked.

The new teacher, abandoning all attempts at discipline and trying to talk over a group of rowdy children rather than to them.

Attention – seeking, avoiding or losing it – came to mind as I pondered our ‘2012: Hands up who’s ready!’ campaign which will highlight our raft of events and resources to support your professional learning next year.

It seems there’s a lot of discussion out there around alternatives to ‘hands up’ in class, as well as novel ideas for getting students’ attention. And while a lot more goes on in the 21st century classroom than teacher-posed questioning, there are times when we do want to call on students to offer their thoughts to the group. Looking forward to your comments and suggestions on these!

Response boards
An experiment on a class of British 13-year-olds banned them from raising their hands for a term. It showed they learned twice as fast when asked to write their answers to teacher-posed questions on a small whiteboard, and then raise them together. While the technique was unpopular with both students and teachers at first, it proved to prevent the minority of students from dominating, and to give the quieter children more confidence. Some teachers also get students to use pre-written response cards. These could be ‘agree/disagree’, or numbers from 1 to 4 indicating level of understanding. Students indicating a high level of understanding could be called on to share with the class. How would this work with your students?

Two thumbs up
What about replacing the traditional hand-raise with a newer gesture like two thumbs up? A primary school that adopted this was derided by press and parents alike but the principal maintains that “it has calmed the students down. Staff have noticed a positive difference in the amount of people answering questions.” Do you think using an alternative gesture would make a difference in your class?
Cold calling
Some teachers swear by choosing a different student by name to answer each time; they maintain this shares the love (the pain?) by giving everyone the same opportunity to speak. A (partial) pack of cards can be used to make this more fun – assign one card to each student and pull one out at random – or write each student’s name on an ice block stick to pull out. Would your students find this challenging or confronting?
Silence is golden
The uncomfortable silence that sometime hangs after your question isn’t such a bad thing – call it ‘think time’. There are various studies around the benefits of leaving at least 3 seconds for thinking before expecting a question to be answered. One article I read highlights the use of think time at various points in class dialogue, not just after asking a question. For example, think time after one student has responded allows the others to ponder and react to what they’ve heard. A pause in the middle of teacher talk gives the class time to absorb and process information – and allows the teacher to reflect too. And how often are we guilty of spitting out the first answer that comes to mind, rather than pausing and taking time to think of a considered response? Would modelling think-time help your students embrace it?

Attention seeker
And how about the age-old problem of getting your students’ attention without sounding like a sergeant major? Do you put your hand up or clap, and wait for them to follow suit? Play a piece of music? Ring a big old bell, blow a whistle, bang a drum, dance on the desk? What works for you and feels respectful?
And if I've still got your attention, do check out our website to keep up-to-date with what's happening in the new year. International visitors include: Guy Claxton - Andrew Fuller - Carolyn Coil - Lee Crockett - Kath Murdoch - Gavin Grift - Joan Dalton - James Nottingham - Graham Watts - Bill Lucas - Tony Ryan - James Anderson.